Top states for state sponsorship and study in 2022/23

Deciding on where to study can be a challenge. Most people go to Sydney / Melbourne not realising the benefits that studying in regional or other states can provide, not to mention that the costs of living and renting in the major cities can have a huge impact on your budget and ability to enjoy your spare time!

So this article will highlight a few alternative options to the above, and explain how ‘Studying in certain states’ can boost your points and chances gaining residency after your study! But remember, each case is different and it’s important to work with professionals that understand the process to ensure you have  best chance of success!

To start with, Australia is made up of 6 states (New South Wales, Victoria, Queensland, South Australia, Western Australia and Tasmania) and 2 territories (Australian Capital Territory (ACT) and Northern Territory. And each July, the Department of Home Affairs (immigration) allocates places to each state and territory.

Each state government then assess which occupations their particular state need to fill, and add these occupations are to their list and if you are nominated by the state / territory you can apply for one of the state sponsored visas (190 or 491). And getting state sponsorship means you could have less points than someone trying to apply for the more competitive 189 visa and with the state nomination, you can still able to apply for residency!

Below is an overview to the states in Australia and the sponsorship places for 2022/23. The good news is that all states and territories have more places than 2021/22 but some states have bigger allocations. Western Australia for example, has over 8000 places which is a large number for a regional state. 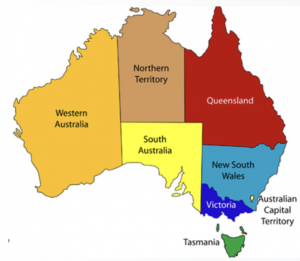 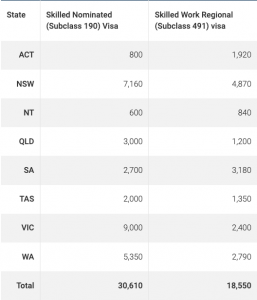 Strategy to get permanent residency in Australia

Based on this, it’s important to look at your occupation in terms of which state offers sponsorship, and then look at the criteria of that state. Focusing on states that require your occupation and choosing to study there or meet the requirements they set, is the best thing you can do as part of your residency journey.

As mentioned, different states each have different requirements and although these can change over time, it’s super important to have a plan that ensures you give yourself the best chance of success.

Which state is best for permanent residency in Australia and why?

For example, Western Australia has great offerings for students who choose to study in their state and they even have an occupation list specifically targeting occupations for graduates known as the GOL (Graduate occupation list). The GOL has been expanded to include 331 occupations, and includes a huge variety – such as Analyst Programmer, to Agricultural Engineers, Bricklayers, Cafe or Restaurant Managers, Carpenters, Civil Engineering Draftsperson (and other engineering professionals), Cooks and Hotel or Motel Managers to name just a few!

In addition to the GOL there is also the WASMOL (Western Australian skilled migration occupation list ) which is a list of required occupations that is aimed towards those who are working in the state.

Another State that has expanded its occupation lists for migrants is South Australia, it also has a list aimed at Graduates of South Australian schools, featuring a large selection of occupations including a variety of managerial roles in a range of industries such as Finance manager, HR manager, Sales and Marketing manager, Cafe or restaurant managers, and a good selection of trades (carpenters, Chefs, motor mechanics) and health occupations and creative industry roles.

The graduate stream criteria varies for each state but the general criteria to meet is that you have studied for a specified period (usually 2 years) and achieved a qualification related to the occupation on the graduate list – in some cases, students who already hold a profession and do further study can consider both the ‘working in state‘ list as well as ‘studies in state‘ lists. One of our clients, a student who achieved a Bachelor in TV Production in Brisbane, relocate to South Australia (as their occupation was on the SA List), they completed a Masters at University in South Australia and went on to receive nomination from the South Australian Government as a Film and TV producer as their occupation.

The 190 visa is the most popular option for PR (after the 189 skilled independent) because the States nomination list is often more expansive than the standard MLTSSL, but the 491 visa, which is specifically targeted to those who are living/working/studying in regional areas, is gaining more places and as it provides more points (15) towards your EOI it can greatly speed up your pathway to invitation. The 491 is a temporary 5 year visa but it does have a simple pathway to PR (and you also get medicare!).

State sponsorship for residency in Tasmania

Tasmania is also a good option for those who have an occupation on the state’s critical list. If you study in an occupation that’s on the critical list for 2 years (e.g. Social Worker), then you may be eligible to apply for the 190 visa after graduating without needing to get work experience! Similarly, Tasmania is a great state for those working in your occupation. In the last 12 months (even during COVID), we’ve received nominations for our clients working Chefs, Cooks, Restaurant Managers and more!

In summary, all states and territories in Australia have different lists and there may be more than one state that wants your occupations. As mentioned above, having a strategy from the start will help give you a clear pathway and your journey to residency, the best chance of success.

At EMSA, we have a team of Education and Migration specialists that work hand in hand to help you achieve your residency dreams in Australia!

So let’s look into the regional strategies you could consider. If you study a course in a city like Sydney, Melbourne or Brisbane, you’ll only score 5 points for your 2 years of study. But if you study in a regional area like Tasmania, South Australia, Western Australia, the Gold Coast or Sunshine Coast, you will get an additional 5 points for regional study. So thats double the points for the same duration of study purely due to where you study – Not only this – BUT you can often be nominated for a 491 visa if your occupation is on the relevant regional list, which could give you another 15 points – so one decision could result in a potential 25 points towards your EOI score!